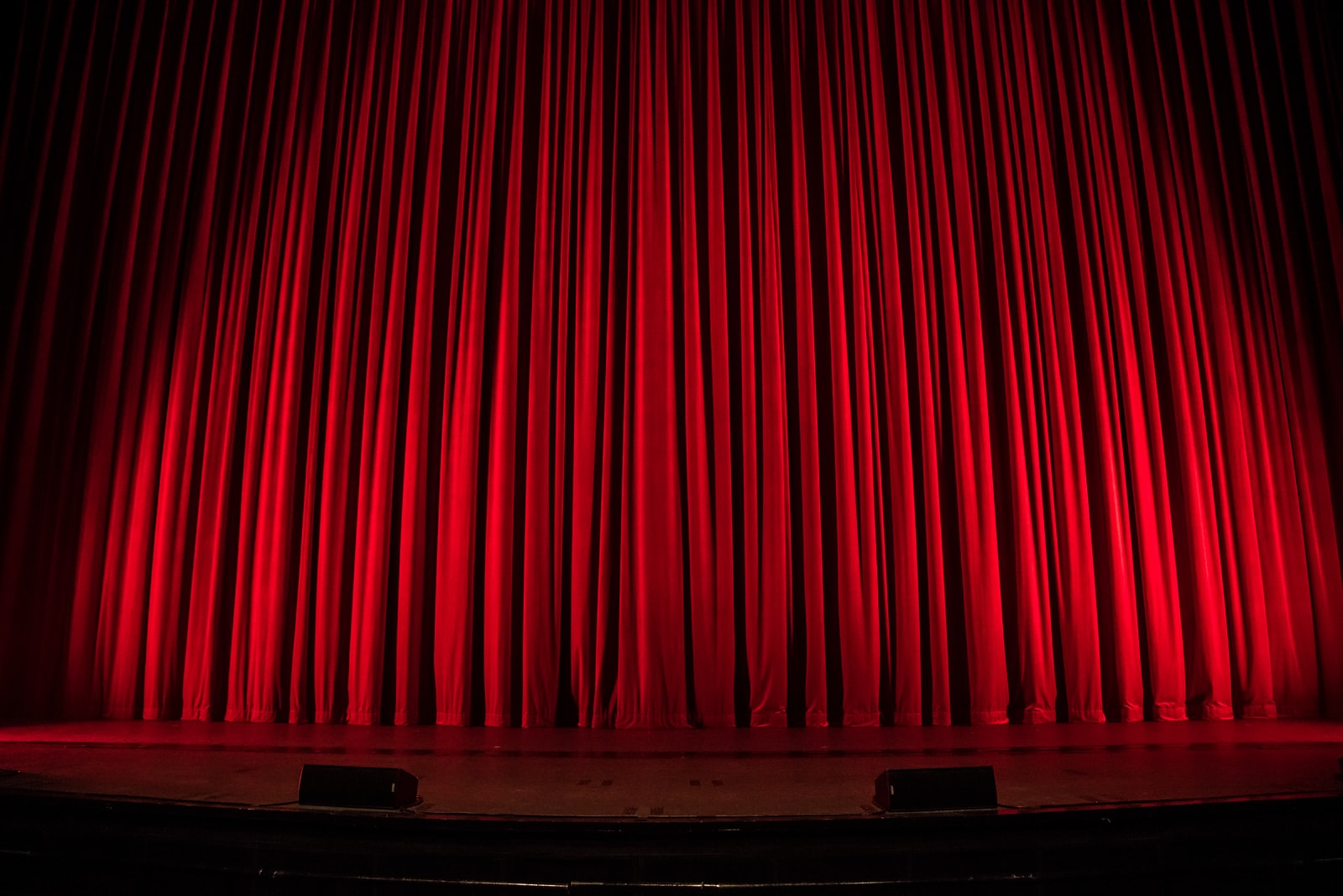 ...
"Buttons, no longer Buttons but just an actor, collapsed."

Buttons, no longer Buttons but just an actor, collapsed. Heart attack was my first thought. Then, aneurysm. I didn’t know what an aneurysm was exactly, but I thought it had something to do with brain failure. Something, I thought, bad enough to make a person collapse out of the blue. We were in the stalls. I stood without thinking, to get a better look at the scene. The panto had been standard up to that point; the girls seemed to be enjoying it, but my mind had been elsewhere. When Buttons stopped, I thought he’d forgotten his line, his place in the script, but really, he was, as we found out later, dying. Crew appeared onstage. Cinderella knelt by her Buttons and spoke to him. But his expression was blank. A discreet circle formed. A man in the stalls went to the edge of the stage and started telling everyone he was a doctor. One member of the crew guided him onto the fairy tale set. It was the wedding scene: Buttons rebuffed.

It took me a moment to notice Mols tugging at my shirt. I looked to her. Her round, confused face. When I became a dad, I thought an entirely new space would open in my head. There’d be room for as many children as we wanted. And as it grew, it would become sturdier, the furniture more worn and familiar, and the lamps would be gas. A neat room in my brain for my children. But it wasn’t like that. It can’t be. You aren’t gifted a new frontal lobe; you just must deal with it. Sara was nine, nearly ten, and I still had no clue if anything I did was right. The stalls and dress circle above mumbled, distressed. Emily collected our eldest in her arms. I bent down and picked up Mols. My dad used to give me fireman’s lifts when I was Mol’s age. That was something I could do, I thought. We followed the flow of people leaving the theatre through the fire exits. The safety curtain was down. The panto was over. Outside, Church Street. Mols, wrapped around my neck, relaxed and tightened her grip. I felt her small fingers dig into my back. I felt comforted. As we neared the car park at Central, I went over the unexpected, awful turn the evening had taken. Mols mumbled into my ear. She fell asleep in the car, exhausted.

I thought it was a myth. But no, it turned out to be true. Molly, no longer Mols, always Molly, stood her ground. ‘You can’t make me go.’

She gave me such a hard stare I almost laughed. But I had to keep my composure for the sake of this evening.

‘Correct.’ They’d said on Radio 4 the other day, one of these parenting experts had been on, that parenting is acting. So, when Molly stood her ground, playing the part of rebellious teen, I acted my part too. ‘You’re not spoiling this.’

‘Tonight,’ I said. I could hear Emily and Sara – Sara, who had got through her teenager years without much fuss – talking in the good room. I shut the kitchen door, so I could speak to my youngest in private. ‘Your nana’s coming.’

‘She doesn’t get to see you two much.’

‘I don’t care.’ She went to the fridge and got a Pepsi Max, as if we weren’t in the middle of an argument. ‘You can’t stop me.’ She paused. ‘And I hate it when you say, “you two,” it makes my skin crawl.’

‘That’s not true. What’s the law that says I can’t be home alone?’

I remembered all the things I didn’t know. Like quick flashes of light. There were so many. I still couldn’t drive. How my pension worked was a mystery. That was starting to get a bit worrying. I knew nothing important. Science: I didn’t have a clue. The body. Diseases. Aneurysms et al. If my wife or daughters got seriously ill, I’d be lost. I imagined standing over Emily as her body spasmed, her eyes rolling back, and all I do to help is put the kettle on, touch her shoulder gently, say, ‘Come on, you’ll be alright,’ and pace about the house, like a lemon. That never happened, which was a good thing, for both of us.

‘I’m going upstairs,’ Molly said, bringing me back to reality.

‘I want you down here in half an hour. Six o’clock, Molly.’ I followed her. ‘Six o’clock, we’re leaving.’

‘You don’t have to say o’clock, Dad.’ She paused, half-way up the stairs. ‘You sound like a twat.’ She disappeared into her bedroom.

In the good room, I turned to Emily and Sara. They were watching tele. In fact, Sara was on her phone, bunched up on one side of the settee.

‘She just called me a twat,’ I said, head bowed.

Somehow, all four of us ended up in the car. Sara had bought a new dress for the panto. It sparkled in the rear-view mirror. Molly hadn’t changed. She wore her Dark Side of the Moon t-shirt. The same t-shirt she’d worn on and off throughout the Christmas break. Emily drove, of course. I was closer to my fifties than my thirties, and I still couldn’t drive. Not for want of trying, I just couldn’t get the hang of it. On my last attempt, I’d got confused at the interchange at Starr Gate, turned off the engine, and stepped out of the car to let my instructor take over. ‘Reckless,’ I remember her saying over and over, until we arrived back at the training centre. And anyway, I would never be the driver Emily was.

Sara pointed out the white Christmas lights as we drove through Lytham, but that was about the only thing that was said.

Finally, we arrived at Central. Emily spotted her mother’s car and parked beside it. ‘Right, come on, family.’ It took a minute for us to move as a family, thanks to Emily’s joints. That was the best way to describe it. Joint problems. She’d had tests. Appointments. NHS blue, NHS white. These were the colours she knew best. She soldiered on. We waited for her to make the first move out of the car. She got out one leg at a time. She quietly seethed, but once she was out, she was moving, and as she hugged her mum hello, I wondered what it took to learn to hide your pain like that, what you had to do to bottle it up.

Emily collected our five tickets from box office. I lost sight of Sara and her nana as we worked our way through the narrow corridor, down uneven steps, until we arrived at the stalls. Emily nipped to the loo. I stood just behind Molly.

Sara showed Nana to her seat. Molly wandered, her back to me. I watched her. She turned. After making eye contact, she started her slalom through the theatre, narrowly dodging a toddler with a light-up wand. I followed. Getting further from our seats. But I couldn’t shout. I could only follow. Emily would’ve said, ‘Molly, stop,’ and that would’ve been it, but I didn’t have that power. If I shouted her name, I’d never hear the end of it. I’d be twat-supremo then, forever. So, I followed. She zigzagged through the bar and out, out into Church Street and the world at large. I used my voice now. Less commanding, more exasperated: ‘Molly.’ She either didn’t hear or ignored me. Both seemed possible. He’s behind you. He’s behind you! The Grand was a good way away now. The wind was high, and as I followed Molly to the gap between the Tower and Hounds Hill, I was glad to see her come to a stop. Her black hair flew about every which way.

‘Just, just piss off, alright?’ She said it like a question. ‘You’re always just there.’

I didn’t have the energy to tell her off and walk back to the theatre, and think of a reason for missing the start of the show, so I simply said, ‘Can we do this at home? Just save it, alright?’ Hearing myself talk, I noticed how similar our voices were. The intonation. The little rise at the end of everything we said.

Molly gave her eyes a rub. She’d started using eyeliner the summer just gone. I had seen her take one of those short black pencils from her sister’s dresser, when she thought no one was looking.

I hadn’t realised, but she’d been crying. ‘We never talked about it,’ she said. ‘You never even mentioned it.’

‘What happened. That guy who died,’ she said, throwing it away, embarrassed. ‘We just carried on like it was nothing.’

‘You remember that?’ I had always seen it as a freak accident. Molly was right – we hadn’t discussed it properly. Sara had asked some questions, but there was never a peep out of Mols.

I watched as her face contorted. ‘Of course, I remember. I just, I just.’

I closed the gap between us, hugged her tightly, tucking her head underneath my chin. ‘I’m sorry.’

She asked if we needed to go back straight away. I sent Emily a text saying Mols felt sick, and needed some fresh air, so we were going for a walk along the prom.

She talked about how nervous she felt about her mock GCSEs, how she thought she was losing all her friends at school, and how she hated all her teachers, especially Mrs. Plumber, and didn’t know at all what to do with her life, and as she talked, I felt a huge wave of relief.