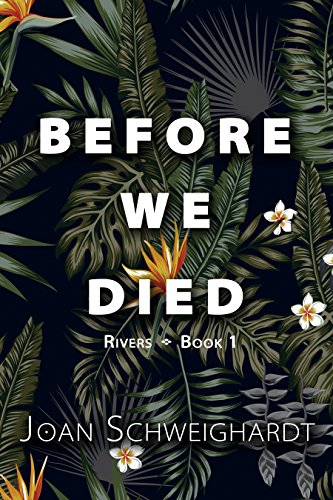 Joan Schweighardt is celebrating the one year anniversary of the publication of her trilogy. Collectively the three books in the Rivers series cover the years 1908 to 1929 and concern two different groups of people: an Irish Americans in the New York area and an Amerindian/Europeans from Manaus, Brazil. We are delighted to share an excerpt from Before We Died.

Book One of The Rivers Trilogy

1909. Manaus, Brazil. After an entire season of rubber tapping deep in the South American jungle, it is made clear to Irish American brothers Jack and Baxter Hopper that they are not going to be paid. They are furious. They are near starved; they have faced every sort of danger over the last year; they have lost one of their campmates to a poisonous spider bite and another to madness. They want to leave. They need their money. Leaving Baxter behind, Jack, the narrator of Before We Died, hitches a boat ride to Manaus, the headquarters of the rubber industry, to try to reason with Abalo, their boss. But Abalo only insists they must put in one more season before they are paid. When Jack argues with him, Abalo sticks a gun in his face and tells him to get lost before slamming the door. Jack is about to knock again when Louisa, Abalo’s maid (and Jack’s friend from a previous encounter), opens the door and tells him how to find the house where Bruna (another friend) lives. She will meet him there.

The green house was no more than a shack, up on stilts like the other structures on the road. It was above the waterline for now, but then the season was not yet at its apex. I walked right past it, down to the end of the dock, and then back up and then down again. I was waiting for my anger to level itself out. I walked for more than an hour, and finally I returned to the green house and knocked. I hadn’t had the presence of mind to think of Bruna in a long time, but now that I was there, standing at her door, I saw myself as she’d see me, peeled down to me very core, looking (I hadn’t seen me own puss in some time but I would wager) like a bucket of snots.

The door opened and a large woman smoking a pipe stuck her head out. She looked me up and down. “O que você quer?” she asked harshly. What do you want?

The woman drew on her pipe and exhaled slowly, blowing smoke and taking me measure. Then her expression shifted. “You the boy who wrote the letter?” she asked in her language.

“That’s me. Jack Hopper,” I said, though I was ashamed to give my presence a name.

She drew on her pipe again and studied me some more, a manky bag of bones with stinking hair and a straggly beard and clothes near ripped to shreds. Eventually a half smile appeared around the stem of her pipe and she said, “Come in, young man. Come in. You are welcome here.”

There were three other women within, one of them nursing a wee babe. She gave me the once-over and then covered her diddy and ran off into a back room separated from the kitchen by a heavy curtain. The other two were older women, the age of the woman who’d let me in. One was wearing a black scarf on her head, tied at the nape of her neck pirate-style. The other had a pair of rosary beads twisted around her wrist like a bracelet, as if to have them at the ready should she suddenly be called upon to pray.

They had been drinking strong-smelling coffee around an ipè wood table. Now they put down their cups and looked with curiosity to the woman with the pipe, waiting for an explanation. There was a plate of cakes at the center of the table, and I couldn’t force me piss-pot eyes to abandon it. I told myself I’d give them a minute, and if they didn’t offer, I’d snatch all I could and run for it.

The woman with the pipe was saying, “This here is Bruna’s friend, the one who wrote the nice letter,” The other two began to giggle. I glanced up to see one of them, the one with the scarf, cover her mouth and blush, shy as a school girl. I nodded, but my eyes were all for the cakes, and I could not concentrate on anything else in their presence. It was only when the door flew open that I shifted my gaze. In came Louisa, carrying a burlap sack, and Bruna was just behind her.

Louisa came forward and hugged me, as if we were the best of friends. She pulled an envelope half out of the sack, to show me it was full of mail. Then she backed away from me, grabbing her nose and mugging a face so as to assure the others I smelled as bad as I looked. Everyone laughed, except Bruna, who was still standing near the door. She smiled shyly when our eyes met. “Estou faminto,” I whispered. I’m starving.

The three older women looked at one another and then exclaimed all at once and jumped up from the table. The one with the pipe, whose name, I soon learned, was Nilza, pulled her chair out and patted it with the flat of her hand while yelling, “Sente-se, sente-se!” Sit, sit. I was smiling uncontrollably by then, though I can’t think why, other than that something seemed to have snapped in my mind once I knew I was to be fed. I sat, and someone shoved the plate of cakes before me, and soon enough a mug of hot coffee appeared beside it.

Now the older women got busy at the wood stove, putting together some concoction that involved the cutting of vegetables, and the younger women took their places at the table. While I shoveled food into my gob, one cake after another with no regard for whether anyone else might care for some, Louisa peppered me with questions. What was I going to do about getting my money from Abalo? Had I made another plan? Where was my brother? Weren’t we working with two others? Where were they?

I couldn’t stop eating. Louisa placed her lovely golden hand on me manky arm. I looked at it there, such a dainty thing in its gray sleeve with its starched white ruffle at the cuff. Perhaps she meant to slow me down, but there were only two cakes left by then and I was having them if it killed me. Meanwhile Bruna sat with her pretty chin on her palm, leaning in towards me, her eyes wide and a bit moist, waiting for what I could not wager. Adriana, Nilza’s daughter, had finished breast-feeding her dote by then and joined us at the table with the wee cub, who bounced on her lap and laughed and dribbled, doing his best to garner all the attention away from me.

I began to answer Louisa’s questions with my gob still full, the crumbs a-flying. But seeing as that wouldn’t work, I went on chomping and let the women wait until the last cake was gone and I’d wet my disgusting pillock of a manky finger and used it to wipe the remaining crumbs from the plate. Then I had me a good burp, for which me mum would have slapped me upside the head, but it was beyond my control, and the young women must have agreed because they only laughed, and when the dote joined in, laughing like he even knew what was funny, the older women started laughing too, and soon we were all cackling like a barrel of ninnies.

It was a long moment before everyone had their fill. Then, once it was quiet again, Louisa lifted a brow to remind me she was still awaiting answers to her questions. And so I took a deep breath and began, and once I was going there was no stopping me.